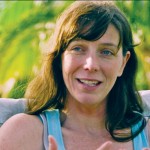 Dr. Cobb is an associate professor in the School of Earth and Atmospheric Sciences at the Georgia Institute of Technology.

Why Kim Cobb, Ph.D. Is Involved

I felt absolutely compelled to do this shoot, as a climate scientist who is deeply invested in science communication, and even more so as a woman in science (and a mother of 4 small children). While every fieldtrip yields scores of new samples to feed the mass specs, the friendships I made on this one were truly unique.  And in a way, that’s what the YEARS Project is all about: climate change as a story told by people, from one human to another. It’s always great to share that passion with my students on-site, but this time, in front of the cameras, I felt both the burden and the privilege of being the face of the corals that have reveled so much about climate change in this region, and the island that has offered up these precious time capsules. I certainly gave it my all.  For science, for women, for Christmas Island, for the planet.

Kim Cobb’s research uses corals and cave stalagmites to reconstruct tropical Pacific temperature and rainfall patterns over the last decades to millennia. She received her B.A. from Yale University in 1996, and her Ph.D. in Oceanography from the Scripps Institute of Oceanography in 2002. She spent two years at Caltech in the Department of Geological and Planetary Sciences before joining the faculty at Georgia Tech in 2004. Kim has sailed on six oceanographic cruises and led five caving expeditions to the rainforests of Borneo in support of her research.

Atmospheric scientists study the weather and climate and how it affects human activity and the earth in general. They may develop forecasts, collect and compile data from the field, assist in the development of new data collection instruments, or advise clients on risks or opportunities caused by weather events and climate change.

END_OF_DOCUMENT_TOKEN_TO_BE_REPLACED

Reporters, correspondents, and broadcast news analysts inform the public about news and events happening internationally, nationally, and locally. They report the news for newspapers, magazines, websites, television, and radio.

END_OF_DOCUMENT_TOKEN_TO_BE_REPLACED

The future of oceanography will require that our nation’s brightest minds apply themselves to issues of global concern, the environment, climate change, biodiversity, and sustainable resources.

END_OF_DOCUMENT_TOKEN_TO_BE_REPLACED

On Friday, September 20th, millions of people from around the world will walk out of their schools, workplaces and homes to join the youth-led Global Climate Strike and demand action on climate change and justice for everyone. After multiple reports highlighting the dire situation facing our planet and wildlife, one thing has become abundantly clear: END_OF_DOCUMENT_TOKEN_TO_BE_REPLACED